Putting this route seperate because its DLC... also it wasn't that long so I am glad
I got it out of the way and I ended up buying after all because
even if this dude is an uptight asshole he still deserves a happy end.
Also let me be clear this is the only DLC I bought for this game.
Not like anyone cares... it must suck if you don't have a jpn psn on your vita...

Fujiwara no Yasuhira is voiced by Toriumi Kousuke.
You must atleast do Kurou's shinsenen event in chapter 2 and sit through
the Izayoiki normal end first... to watch Yasuhira meet a pitiful end because
some of his events require Nozomi to have prior knowledge to know what's up. 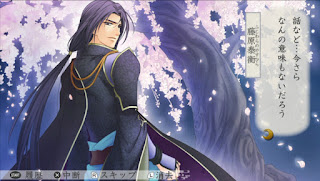 (This CG isn't from his route... but from Shirogane's side story sometime before his ending
and well the decision of Nozomi to see Yasuhira made Shirogane very sad, kinda stupid.)

His events take place when the party after being betrayed decided to go to Hiraizumi.
Yep you have to play the game normally to access his route, which makes the
decision for it to be DLC even more questionable than ever before.
It basically Nozomi putting her nose where it doesn't belong like the first time she makes
food for him together with Saku he's like bitch get out I didn't ask for this did I?
Wow rude! even Nozomi is like you ungrategful bastard how dare you!
Nozomi runs into him later in the mountains near Hiraizumi and when
she doesn't go back as told he just grabs her arm and drags her back with him
because he can't have a little kitten get lost in his backyard, he's like what a cute face
you're making, never been touched by a man like this or sth but as soon as they
get back to town he let's go of her arm and excuses himself. 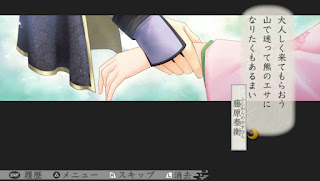 Yasuhira disappears in a flash of light and Benkei wonders why Nozomi is spacing out like that
and so he explains that she was merely looking at Yasuhira's shiki cue benkei teasing her.
They meet again later after Nozomi plays around with Kugane, who jumped into the pond.😅
Kugane is Kurou's dog  that Yasuhira is looking after because he's not that mean, he's glad
she looked after this mendokusai dog till he came to fetch it but there's no need to thank him
and well Kugane gets all excited and even if Yasuhira tells him not to jump on him
when he's wet it lead to a hilarious scene sigh look at what you've gone and done now?
Yasuhira is wondering why she's staring so much while he's all wet...
well anyone would stare when a hot bishie is drenched, he tells her to fuck off as usual. 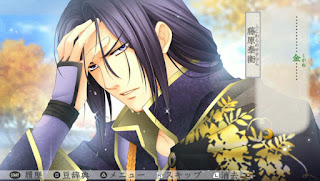 Shirogane comes around and wonders what's up... Yasuhira tells him not to go into it further
and they leave, Nozomi goes for a walk in the mountains she asks Kurou some stuff
before she goes off on her own and finds some secret hideout cavern
oh and none other than Yasuhira is there telling her what a no good miko she is.
He tells her about some stuff that happen between Kanazawa and Oushu a hundred years ago
then Nozomi's gekirin tries to send her off somewhere she doesn't want to go, Yasuhira pulls
her back somehow and tells her if she values her life to not go near this mountain again.
When she gets back to the residence after purifying all those weird ass stones and Hinoe rejoins the
group but before going to Taisha Saku tells her Shirogane was looking for her so she goes to
Yasuhira's place who is all like the fuck you doing here i'm in the middle of a meeting!
Shirogane politely explains he's the one who asked her to come or more accurately fo Saku to pass
the message, Yasuhira is like how annoying and Shirogane immediately apologizes anyway
he has Shirogane and Nozomi help him on a trip near Kanazawa for some banquet
and when the day came Yasuhira cannot believe she actually showed up! 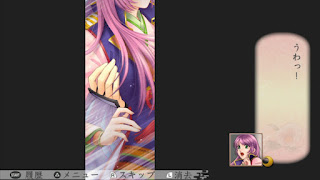 He later just ups and grabs her and pulls her up on his horse stays her to put up with it
Nozomi tells him of the time in the mountains when he took her hand and he immediately
goes ugh don't bring that up and before you know it they've arrived at their destination.
Finally there and when the talks are over he gives her a fan...  and has her dance
at the banquet to entertain the guests, Yasuhira compliments her. 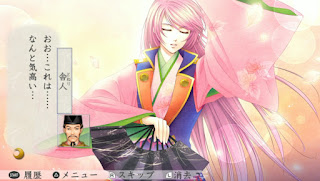 Oh well they fight some onryou at Taisha and Kagetoki shows up near Hiraizumi
Hidehira/Mitachi gets injured and winter comes, signaling a fight
is about to break out between Hiraizumi and the genji.
Nozomi will act on it and the whole Taisha construction was so Yasuhira
can perform some Mahakala ritual...
Yasuhira is like its no use talking to me get out let me do what I think is correct to save Hiraizumi. 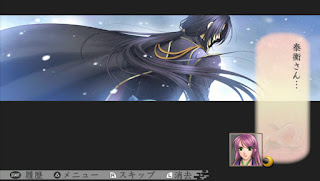 Plot proceeds as normal and there's not much Nozomi can do... she remembers the fond moments
Yasuhira tells her this is Hiraizumi's problem ever since a 100 years ago and tells her to get lost.
The soul devouring witch Masako shows up and the others head to Taisha
Yasuhira ends up sealing her using the Mahakala ritual and all is well that ends well?
Hakuryuu gets ready to send Nozomi back to her world and everyone sees her off however
one person isn't coming because he got gangbanged by some goons when out in the countryside
because he ordered Shirogane to stay with the miko, those goons were out for revenge
against Hidehira? or whoever since Yasuhira was behind that plot and used Shirogane to do it
however this time Nozomi finds him lying there half dead, he wanted her to just go back to
her world knowing nothing since he knows all too well this is the path he has chosen.
It sorta makes him happy that she was worried and cried for him...so now Nozomi
uses her scale of the white dragon to go back in time and change his fate. 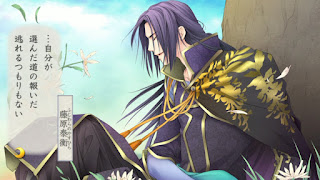 Back when she made the bento she takes a different approach and so he wonders what is up with her.
Oh and realizing it was his shiki when he walked her back to town she couldn't but feel him up
making him ??? it wasn't as lewd as I made it sound so forgive me, she goes to the cavern that
would surely mean her death but tells her she knows what it is he's trying  to do now with those
shiki's and also tells him of the future in which he dies because he tried to stop Masako with the
mahakala ritual,  anyway you should know by now who Masako is... she is a manipulative witch
who's also a god(荼吉尼天) who's been around for some time by eating peoples souls
anyway this is his fight  not hers she shouldn't meddle in it, also don't come here ever again
if you do not wish to be warped to times unknown to you, Nozomi decides help Yasuhira out
and that she will change his fate that was decided a 100 years ago, yasuhira is like lol what
I will defeat dakiniden with the ritual there's no way for you to risk your life for mine. 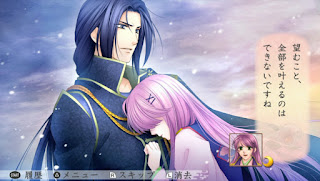 Nozomi goes to the mountain cavern alone determined to change Yasuhira's fate in the distant past.
Yasuhira decides to come with her too he can't quite believe it either but yeah...
They find what appears to be Masako in a different form, that of a fox
or more likely her original form, Nozomi decides to defeat it but Yasuhira ends up protecting
Nozomi from one of her attacks not to worry it was just one of his shiki's but Yasuhira
in the present ends up feeling some of its pain and says that he is living for her sake now.
Meanwhile Nozomi faces Masako aka the dakiniten alone and lives to tell the tale
after that Yasuhira shows up and seals it. (anticlimatic isn't it?)
In the ending its revealed that in the present he was able to sneak away from his duties...
oh well Yasuhira's fate has been changed and the two live happily ever after not that we get
to see that in detail, the writers didn't care so I won't either and no I didn't leave anything out.
I'm indifferent about Yasuhira, he appeals to me but romantically IDK... the route didn't
do much to make me like him more... the story was okay I guess but a little disappointing?
Yasuhira doesn't even get a side story like all the other guys(let alone a decent epilogue)
I can see why some are just disappointed its been over a decade and this is what we get...
I'm sorry to sound ungrateful but when characters such as Hinoe, Yuzuru, Ridvan or Masaomi
get decent side story epilogues why can't the rest of the guys? the others just get some bridge the gap
or reminisce story and I just sigh deeply it can't be that hard to keep it consistent.
Not that all of that matters because Yasuhira still gets the short end of the stick.
My summary prolly isn't accurate enough but I don't care since who cares about half of the
plot of Yasuhira doing stuff because of shit that's been brewing since 100 years ago.
The romance was very subtle and the ending is only the beginning of their relationship
but that's the case with most ending in the original game so I shouldn't complain.
I just wish there was a side story like all the other characters have...
In the end even if he has a route now and has become 'romanceable' I can't help but
say its a waste because KOEI didn't put all of their effort into it.
You know its bad when the average fanfiction writer will be able to come up with something
better ever since the izayoiki game came out on ps2 including a decent epilogue.
Even otomate usually delivers on that. -_-
TL;DR its not worth it especially when KOEI already overprice this game
you can't tell me its gonna cost more just cuz u fully voice it while removing cg for new ones
all while the content people buy it for like yasuhira has to be bought seperately for 25$
if you didn't preorder had they just include it then yes it would be more passable.

Its also sad that half of his cg's are a vertical bar that doesn't even get recorded in the
gallery so lol it obv KOEI is cheapening out they even used a variation of Nozomi's dance CG
all they did was change the color of the fan, i'm not shitposting just posting the cold hard truth.
Do I recommend this piece of DLC? only if you want to romance Yasuhira that badly, I do not think
this is worth 2500yen and firmly believe it should've been in the game in the first place.
KOEI goes and gives their vita port an ultimate subtitle well if it was the ultimate
experience you wouldn't have to sell this route as DLC.  (눈_눈)
Okay I admit that was harsh, though they should have put this in the game to begin with.
Romance ★★☆☆☆
Plot ★★☆☆☆
Enjoyment overall ★★☆☆☆
~
Maybe you'll see me with a post on haruka3unmei no labyrinth soon that is if they port it
but it is sure tempting to buy a psp copy for 35$... hmmm what to do?
Anyway it won't be soon give me a few months or so, also tfw blogger think it made
a duplicate of a concept post and overwrite one in the process, sigh.
Geplaatst door Rurunikiri op 8:14 PM