Blue Reflection Sword of the girl who dances in illusions - Review 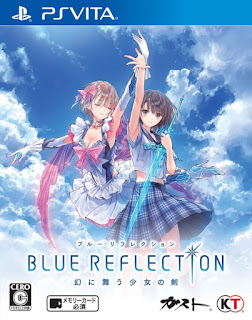 Well another JRPG game review because after Haruka 3 I felt like actually playing an actual JRPG
and not one that only has gameplay to drag out the VN parts anyway I enjoyed playing Blue
Reflection despite it being rather short and far from perfect, I see no reason to dislike it.
If you think this is another waifu simulator think again its about girls growth etc.
I'm sure most people are like wait another highschool RPG like persona but this time
its highschool girls by day and magical girls fighting evil in the moonlight? (lol)
I admit it sorta was like that too but I still played it and enjoyed it for what it is.
I am not good at writing these sorts of reviews but sometimes I just do em. 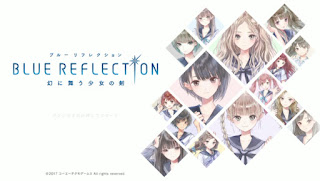 Pro's
- Likeable Heroine/Protag.
- Most if not all characters are likeable.
- Art.
- Music.
- Distinct style, this game really stands out.
- Magical girls.

Con's
- Short & no replay value, once you are done(platinum) you are really done.
- Part voiced, only main events, sub events are mute.
- Weird camera angles catering to fetishes.
- Can get a tad repetitive.
- Battles are too easy no matter the difficulty.

Blue reflection is gusts newest JRPG, the heroine Hinako injured her foot
and thus can no longer pursue her hobby ballet with joy which depresses her.
She goes back to school after absence its already summer... she missed a whole season
but starts to notice something weird and in a surprise turn of events becomes a magical girl
thanks to Lime and Yuzu who encouraged her oh and they are also classmates?
Together they go help students at their school overcome their depression, doubt or simply put first world problems.
Everyone once in a while a giant boss pops up because it was attracted to people flipping their shit.
That's actually a good way to summarize it.

The overall story was fine though part way I was like oh they're suspicious and やっぱり I figured as much.
I won't say who or what I am talking about... please figure that out for yourself
since this game doesn't have many surprises and the english release is only a matter of time.
Speaking of side chara I sorta liked Shiori who apparently is friendly with everyone including
guys but encourages other girls such as Hinako to be more outgoing she just wants girls to shine and be pretty!
Some student got the wrong idea in her chapter though and caused her to breakdown too...
I am partly like girls can decide for themselves whether to use make up don't force them. -_-
Oh well Chihiro was perhaps the cutest she also makes small stuffed animals, I also liked Rin and Yuri Saiki.
TBH I really ship Hinako and Yuri Saiki, they are perfect for each other too bad we don't see
more of it and I am disappointed Yuri just fell into the background after her intermission
i'm not the person to ship without chemistry but I could tell it could be something more
even if the game never goes further into it which is such a shame.
There's barely anything I dislike about this game..  the story was interesting in its own way
its just such a bummer sub event/bond episode are not voiced it also makes it so unmemorable.
(except Shiori 2nd to last one because it was funny.)
I think most side characters are underdeveloped though... especially Yuri yeah she is an intellectual
who is a little aloof and thinks she's empty and her events let her find out emotions better
she uses an assault rifle as her support skill, I think more could be done with her
and I even expected Yuri to be a rival magical girl love interest but alas.
Sigh... I wish they could put more effort into some parts of this game the final boss was awesome
but also sorta lol worthy and when you really think about it this game may be the base for more. 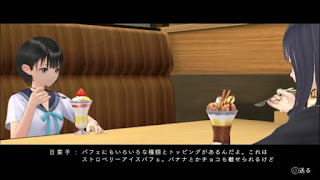 The game has a very distinct style, you can tell its clearly catering to peoples fetishes with
the odd angles but said angles are very innocent so even people like me can brush it off.
I love the designs of menus too and the way the story is told gives the world so much life
even if the setting is very tiny,  the models are a little stiff and anime-ish but its not bad, I think
they're pretty despite that oh and the music? gust doesn't disappoint with this game.
I enjoy the battle system and you know a game is good when one wouldn't mind fighting enemies
even if you do not earn levels from it, the camera angles  in battle are nice too except
the one that zooms in on the back.
Wait then how do you level up? you use points that you earn from completing story stuff
every once in a while, the max level is 50 btw which you'll reach naturally.
The boss battles are fun, pay very close attention to the turn order and delay their turns
by pushing them back all while managing your ether if you lack it you're in a pinch.
I do not even mind that there are only three party members!

There's three difficulty modes, I just played on normal... since I see no reason
to suffer on hard when there is no trophy for it atleast thats a fair excuse right, lol.
Lime was most definitely the most overpowered member, one atk buff from Hinako has Lime
one shotting monsters left and right this is good no one wants normal battles to drag out
also MP recover after every battle which makes it even easier to spam the best move... ~_~
I still watched some people play on hard and well that was mostly the same as normal
which surprised me and I think I could've handled hardmode afterall?
Atleast the PS Vita version of Blue Reflection runs better than Atelier Firis vita version since
I have experienced zero bugs or crashes which is good, I do not even mind the graphic
but compared to ps4 it doesn't hold up at all... the vita version environment are really bland
and once I popped in my ps4 copy and cross-saved I couldn't go back to vita.
While vita ver runs well, its just not worth it except if you want portability at loss of quality.


The game is more or less about Hinako's growth and bonding with fellow girls.
Side characters shine the most in their respective chapter, its clear the game isn't really about them
but Hinako and the twins, Hinako can bond with side gals & go into town after school and just do stuff
girls do like window shopping, karaoke, go eat somewhere, whatever (lol) you get the picture.
Whether or not you want to see that romantically is up to you... the story isn't romance focused
maybe a few yuri undertones like most of gusts games but no character have explicitly said
they like Hinako romantically, there aren't even individual endings either... which is lazy
because I did expect that, also let me point out another thing gust never advertised this game
to have romance anyway, its all in peoples heads or so i'd like to say don't mind me feel free
to make your headcanons but leave me out of it because I have my own...
Like Hinako x Yuri huehuehue.
There's some hint from NPC girls around the school that some admire others
but this is normal? it never gets far but you could use your imagination.
The way the girls interacted is perfectly normal for the average japanese highschool girl and that is
what this game is about youth, growth and bonds than anything else
I do not want people expecting something only for it to not turn out that way, i'm honestly saying
there wasn't much actual romance other than subtext it would be nice if it did though but alas
we know japan is shy when it comes to yuri we can see that in other media such too.
In most otome to my disappointment it mostly BFF, except in Oyayubihime which had actual yuri route.
I wish there was some sort of true ending because I feel like something is missing
a lot of stuff is just left out so openly but I guess life goes on.
I feel like gust could expand on a lot of things if this new IP is successful
but its sorta rough around the edges in more ways than one. 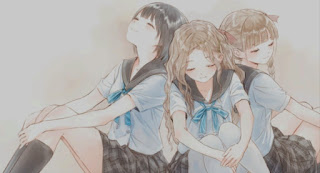 Sadly the only thing that brings it down is the partial dub in japanese, the afterschool
events with the characters would've benefited from being voiced also the way
the game flows could get old fast but a lot of game suffer from that so it no biggie to me
and the fact no matter the difficulty its still rather easy and you can just outsmart bosses
using same tactic over and over, don't know if the game is broken or its just me being 2gud.
I get the feeling they wanted to make it harder but were like let's not make it too crazy... lol.
Despite that it was a fun RPG and i'm glad I can still talk positively about it even if
part of it sort of fell flat since its so straight-forward, I think
either gender can enjoy this and I don't even complain there aren't any guys!
there was one (a father, actually there's two but who cares) but he wasn't shown just heard.
Also its funny how Mel Kishida said BR is a game made by men for men...
its bad I believe him because the camera angles cater to fetishes
and how he doesn't want the girls to end up with anyone; let them remain pure etc.
This post was rather short but that's good... I really do not wish to spoil much about it, the
gameplay was straight forward, fix peoples emotions or sometimes craft items
for someone in need and hang out with other girls during free time.

I have to add something i forgot but there were some promotional images which were nothing more
than promotion images hinting at more, I did everything in the game
and never saw anything like it sigh false advertisement much?
There's also this season pass for 90$... which is too expensive for its own good
you will apparently get a bunch of costumes and new event from it but IDK if worth it, maybe
if it also makes sub event full voice I may have bitten but it feels like a scam.

Do I recommend Blue Reflection? yes... i'm sure if one likes JRPG's
they'll enjoy it despite some of its drawbacks its really a RPG about girls growing up
and all the problems that come with it like friends, hobbies parents and doing cute things etc. 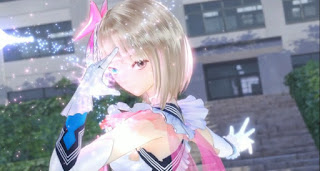