Atelier Lydie and Suelle Alchemists and the mysterious painting - Review 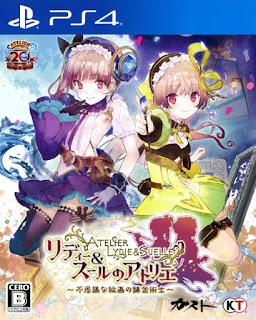 Time for another non-visual novel review, i'm still busy with TaiAli FD on the side.
I played the PS4 version because the vita version did not at all look convincing... besides
after the horror stories of atelier firis and its frequent crashes I played it safe! sadly I do not own
a switch yet so its not like I had much of a choice here! also the vibrant colours
in the PS4/switch version give the game that much more life...
vita looked very bland in comparison even Firis looked better to me.
Just saying i'm not here to shit post like I love my vita... but I also do sort of
want to like actually enjoy games? PS3 to vita ports have been good but PS4 to vita ports
just can't hold up all that well that much was obvious but uhm enough about that.

Yes I like the OP, I feel it captures the game so well especially the sisters
and their true goal, bright, cheerful and colourful happiness is best shared.

The lastest entry of the mysterious series, its the bright and colorful conclusion
I try to write a bit more as a whole there won't be much spoilers.
I didn't think so at first but this series actually managed to have some decent character
development, if you've stuck around since Sophie and the mysterious book you'll definitely notice it.
As for story? its there but very straight-forward, gust focused on the characters this time, there's
plenty of sub events and often I found myself absorbed since there's so many to keep us
entertained while we do requests, perform alchemy and complete ambition notes
to proceed the story; the goal? become the no,1 atelier in the country!
While doing the main objective there's plenty to be distracted by, mostly from sub event

and its better to view as they appear. I let a few stack and there goes
an hour of just viewing events😅. I still managed to focus on other games
on the side while still manage to make a decent progress with L&S.
No character truly or other things was dislikable to make me stop completely and drop the game.

Lydie and Suelle are sisters, they've lost their mom and their dad's a bit of a free loader...
using up the money the sisters worked hard to get which leads them to pursue the dream of their
mom. Eep! this looks pretty grim but it all managed to be quite a heart-warming tale throughout.
All the playables have a place in the story this time, they got a reason to be around
and I hate to admit it but half the cast despite in Firis being oh so likeable did feel
sort of like mercenaries, companions on the road which with the whole journey
so I am glad with L&S they toned down a little bit and tried to fit everyone in properly.
The characters... like Mathias is Mireille's brother, he's a bit of a dork but he fits the
typical protector character, btw i'm sure Sterk would be proud in one way or another.
Lucia is the typical tsundere rival... at first she's a bit annoying but after a certain
character episode the sisters showed her no quarter! and well she sort of gets better after it.
Alto... I don't want to talk too much about him but he's quite cool! most of his sub events
are tied to Sophie's so don't worry about it, quite possible the most interesting sub arc.
Well we all know Firis! nothing will stand in her way, she follows her heart and dreams
and Liane still loves every bit about her.. ah what a sis-con.
I'm still surprised by Ilmeria... she's taken up the teacher role for the sisters
and her friendship with Firis is still strong Il-chan gives Firis the space she needs.
There's Pamela, Hagel(haha yes they brought him back! Fritz and Drossel too
I quite liked how the latter two's sub events wrapped up some questions.
As for Lydie and Suelle themselves... they're both lovely Lydie's a bit more withdrawn
but is like a voice of reason compared to the bumbling genki Suelle.
They both have their charms and both lack something the other could cover. 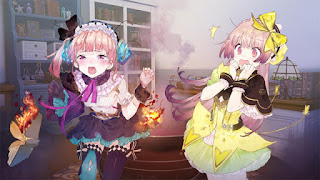 Art is pretty good, it shows how well two artist can work together
and I like how some of the CG's are like an actual painting.
BGM... well its gust as usual they do an amazing job not every track may stand out
but some do! the only field music I liked was from the intermission chapter after the mid-boss
aka the underwater treasury. Dunno why sometimes I just starting humming along. xD 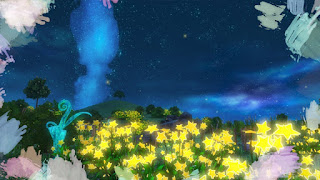 As for the world, there's one town and its quite big atleast I think it is, luckily there's a quick
warp feature to get to where we are really needed. The paintings all have their own
mini story to it and in my opinion its what makes it overall more charming.
My favorite painting world would be the starlight plains one. 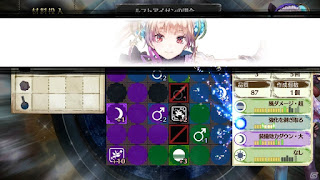 The alchemy system is more or less the same as before with a few tweaks sadly it still uses
the awful recipe idea system and I really wish they're going back to the books next series.
Well due to the game plays out its easy to get accustomed to it, everything is slowly
opened up to you with the occasional boss, the mid boss was cool since I had to
to be like wait uh may I need a few to prepare? 😂 the last boss
was exciting too albeit a bit weak on the story side.

Battle system is like Eschatology/Shallie but not as broken, well that's what I like to say
since if you try you could really be stronger than if you don't all depends
on if you use the right traits on your items and weapons/armor.
Then there's battle mix which let's you use even more powerful version of an item
if you have the right material in your bag that is...
All 6 playables can tag along at once which is nice if you hate benching characters there'll be
DLC too; Lucia and Ilmeria so if you thought there wasn't enough well there you go!
While none of them appear to be locked its possible with the DLC you might be able to have more
freedom but this is not confirmed as I suspect Lydie and Suelle are fixed either way.
Always hated how in Firis; Sophie/Plactha and Liane are locked into the party making it hard
to make your desired team since there are 9 playable in firis yet 3 of them are locked in.
Speaking of DLC... what is up with these 90$ season passes? this started with
blue reflection but why make it cost more than the game? in Lydie and Suelle case
we get like what? 2 playable characters, swimwear costume and extra area
which is all stuff that has costed less back with dusk series.
Well in my opinion regarding koei's season pass BS Blue reflection was the worst thus far
all those costumes and mini event that cost more than the game. Said costumes can only
be used in school not when a magical girl, wow thank you. Okay enough about that
I didn't buy it thankfully but apparently KOEI's shitty practices continue. -_-
Look I love many of their games but... this is getting ridiculous.
That aside I don't think there's any missables either, just try to get a flower circle/max bar
at a rank up exam for Roger's requests just max the bar and you will be fine.
You can also dismiss any request and they'll just pop back up eventually, yes even
the ones that reward you with a battle mix recipe. Money is easy to get as well
if you do requests atleast, sadly by the time you hit the epilogue chapter
you might have more than needed which means you have to spend to unlock
events required to get the shop ending, I found this out the hard way
if gust cut corners anywhere its there i'm sure they could have let us trigger them
regardless of how much we had at that point but alas this is not the case.
Atelier games these days are so easy and straight-forward, Firis was the only exception
but even then it was still easy to reach the goal with time to spare. Its sad they took a step
back here because I actually loved Firis and miss how it was in Arland/early dusk series. 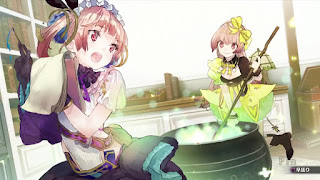 Either way I thoroughly enjoyed my time with Lydie and Suelle
while not as much as Firis its still a good way to end the trilogy, its a
heart-warming tale that has themes of family, hope and dream.
I did not experience any sort of crashes/bugs though there is an occasional
frame rate drop as an area loads in but tbh that's not bad at all
really though I can't find that many negatives, there's probably a few
like this feels more like classic atelier just by the way its paced but
its sort of like Rorona except there's really no pressure to do anything
so if you think your gear/item needs a desperate upgrade go ahead to do just that!
There was only one time there was a sort of time limit  IIRC when you at B rank
but its so lenient I finished it immediately without wasting a second

so like just go at your own pace and you'll get everything done still.
I can see gust trying to capture ways of old but then they hold back...
The other might be how they sort of gave us a last boss for the sake of one
you know it bad when I think the mid-boss fit in more than the last one. >_>
One could hope gust will take a bit of a break from atelier... despite me not finding
much flaw its clear they cut corners here and there where they could.
Anyway I took my time but honestly its a pretty short game still, not that short though!
but if you are impatient to go ham with the alch/battle system you'd be disappointed
as battling/alchemy doesn't reach its full potential till the last chapter of the game
by then a lot opens up and there's lots of powerful enemies to test you, unfortunately by then
the story is already over but that shouldn't stop you from having fun breaking the game even more.
Only the hidden painting dungeon has a little bit of story, errr more like lore to it.

If you already played Sophie and Firis I see no reason to skip out on Lydie and Suelle, its
a great game that finished what was started way back in Sophie through character development.
If I had to be honest the mysterious saga has mostly focused on characters while plot
takes a backseat(like after thought) yes even Firis! no especially Firis, she had her goal
and met so many friends a long the way that made it all more interesting.
I don't want to repeat myself too much so I guess I'll wrap it up... yes I recommend L&S!
at the very least it might be better if you've played Sophie first and as much
as I loved Firis you could probably skip it and be fine?

I do think this might be my last atelier game... lol I say this everytime
a series concludes but somehow gust always manages to pull me back in.😅
Geplaatst door Rurunikiri op 5:08 PM