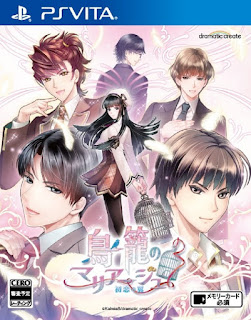 This was Kalmia8's first game and originally an R18 one before getting an 15+ port
Once more I am grateful that dramatic create makes demos of their ports
and I only tried it on a whim to see if it was worthwhile.
The story sure seems interesting but I did not like the story set up though, it seems so familiar.
Anyway the demo gave me a good look at the two main guys for better or for worse.
System is nothing to write home about, standard VN stuff.
I think this is one of the few R18 games that would be better off without an console ports
because the theme here works a lot better when it can go all out.

Kanako is a shy and withdrawn girl wth only one real friend, her classmate Makoto.
Sadly her father passed away and if that wasn't enough Kanako is also left with a huge debt!
A friend of her father's takes her in and promises to take away the debt on one condition, choose
one of his sons to marry and that son will take over his company.
What our naive little Kanako doesn't know is that his sons are hiding their perversion
and she is slowly being let into a birdcage. 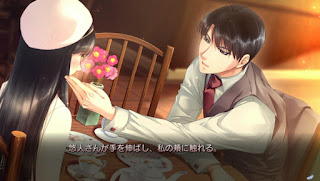 Eldest son, he's kind and was raised into a proper young man to take over the company.
Apparently Yuuto fell in love with the heroine Kanako at first sight and is always nice to her.
I don't really like his overly nice behavior towards Kanako...
and I was right that something was up! for me to go nope, let's get the hell out of here.
You know shit's bad when they guy thinks of you like a doll...
too bad the heroine doesn't hear the alarm bells not like she can do much. (눈_눈)
Sadly Yuuto only managed to creep me out and that's not a good thing
also I cannot believe he tried to drug her! wtf what a creep.
Yep Yuuta's a possessive yandere... with a few screws loose.
I'm actually surprised the demo went on for that long... but I suppose this was a good thing. -_- 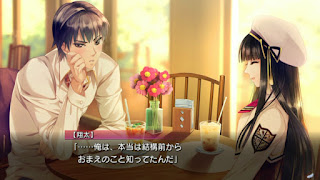 Youngest son and Yuuto's half brother, he's quite rebellious and is in the same class as Kanako.
Shouta may be difficult to approach but he's not a bad guy and imo he's cute.
When you choose Yuuta over him, Shouta will just like ignore Kanako... probably some sort of
inferiority complex since he can't live up to his brother? idk but that seems to be a logical explanation.
Early on he thought Makoto and Kanako were dating and when he asked her he admit he was jealous!
Shouta is cute and awkward? he likes Kanako and finds her really cute and almost
can't resist to hold back at times but sadly even this guy is hiding his kink!
I was about to say this route was more enjoyable than the previous but then he invited
Kanako to his room, proceeded to take pictures of her and ordered her to call him master.
Kanako started crying and then he said: who told you you could cry?
Well Shouta did warn her he was a bad guy but personally I did not expect this. ಠ_ಠ
Is there even one normal guy in this game? right now I doubt it... 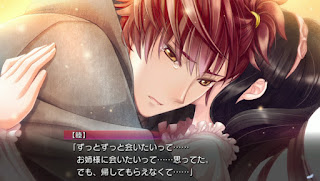 Kanako's best friend and classmate he's kinda girly but always there whenever she needs him.
In the demo you can only see one scene from his route halfway in....
which made things super confusing for me. -_-
Compared to the brother's Makoto doesn't seem to be that bad but it was too short to judge
because who knows what the route in its entirety is like at this point.
You can't do the other guys routes in the demo so I guess this is it.

Hayama Tsukasa, 28 years old.
CV: Kawahara Yoshihisa
Do-M gets excited when Kanako scolds him, former secretary of Kanako's father.
He acts like an idiot but is actually really caring towards Kanako and looks out for her.

Shingyouji Souichi, 40 years old.
CV:  Kinoshita Hiroyuki
Yuuto and Shouta's father and the one who wants Kanako to choose one of his sons to marry
and take over the company... apparently ths guy has a route, well excuse me!
Also for being 40 years old, he sure looks pretty young... ¬_¬

Final thoughts
I went into this not expecting much but I got something alright but honestly
I'm glad there was a demo I could try since this really isn't my type of game.
First of all I don't like the story and two of the romantic interests are forced on you.
Granted they have two other options for our dear heroine but IDK if its worth it for that but
apparently on the first play for ''story'' reason you are only able to choose Yuuta or Shouta. -_-
Also I rolled my eyes when I saw Souichi had a route... 😒
I wonder is this sort of arrangement really possible? sure maybe in japan but I am sure there
should be safety walls that protect the children from being swallowed by their parents debts?
I honestly do not know and I am not the smartest person on this subject.
The overall story didn't even grab me from the demo btw, I even went as far
and try out all routes available in the demo but alas... this isn't for me.

The art wasn't bad though... nor was the music. and another plus was that the heroine is voiced.
Sadly the kiss sounds are a bit too lewd 4 me? I couldn't really take them serious. 😂
I tend to stay away from most modern-setting otomege but I atleast wanted to give the demo a shot
before completely ignoring this and well it sure gave me enough reasons for that.
Partly this otomege felt very realistic? the guys are nice at first but once
you get close to them they show you their true self, appearances can be deceiving huh?
I think otomate and other otome devs spoiled me with their ideal guys and this for all its worth
was a nice ''wake up call'', still I do not enjoy watching the heroine get drugged or whatever.
I'm sure there are people that are into this sort of thing but what happened in the routes scared me.
In all honesty though I gotta say that I am mildly intrigued by how Kanako can find happines with them and possible fix these broken brothers wait no you can't fix people but you could help.
I really cannot recommend unless you like possessive guys...
5,7/10
I don't want to say its outright terrible but I didn't exactly enjoy it and between
this or Koezaru wa Akai Hana I'm more inclined to pick the latter
but then again I'm already floored by other otomege I ordered, orz.

Dunno if I will ever continue and get the full game but honestly I doubt it so this otomege will be ''dropped'' untill further notice.
Geplaatst door Rurunikiri op 4:31 PM