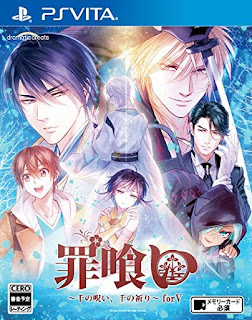 Well time for another demo because its still a while before the games I am interested
actually come out and me is bored... so let's try this and well it wasn't so bad at all. 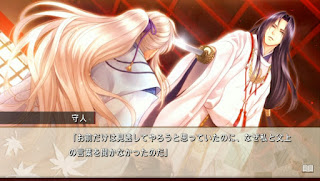 The theme of Tsumikui is sin and reincarnation... and naturally
I was more interested in the past than the present.
Kaoru is a cute heroine but her past self way back in the heian-like period did something
terrible and its come to haunt her in 20XX aka present time.
Kaoru is quite like a typical shoujo manga heroine... the daily life parts are nice
but honestly they are surprisingly draggy and TL;DR as the game did not pick up untill
like an hour of highschool chitchat that barely had any importance to the plot except some moment
halfway through when bad people get brought up and Kaoru almost has a heart attack.
Atleast Souta was cute and I get they did it to show that Kaoru's life
is not going to be the same but it could've been shorter?
It seems that this game mixed some things I like and things I do not like
and executes it in such a way that early on I was basically meh half of the time
but I admit when things picked up it did get better, even if Ren was a little
abrupt in that one scene, he did eventually explain what was going on
and eventually Kaoru is like please help me get out of this mess and well
Ren is more than happy to help her cannabalize the souls of 1000 criminals
to undo a curse thats been running for generations, if she doesn't do this she'll die.
Of course its not going to go smoothly but that is expected, Kaoru's normal life is shattered
after finding out she's the reincarnation of Sera-hime and she's now being led
on a cursed path she may or may not find happiness on.
Even then Kaoru needs a little time... because killing people even if they did bad things
doesn't feel right to an average highschool girl like herself but Kaoru is no doormat
she just needed some time to take it all in and is willing to fight for her life.

Either way the demo is of fairly decent length, you'll get to see all of the main guys
but early on you're only spending time with Ren plus they have the nerf to cockblock
Ren's route behind SIX other guys! sweet mother of Operetta why you do this?!

Pro's
- Interesting story.
- Voiced heroine, her voice is ok, if you don't like it you can turn it off.
- Art, there's moving CG's too.
- Music, fits most of the scenes. 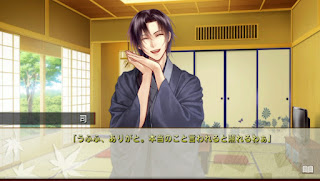 Kaoru's adoptive father... who has a surprisingly cute side to him? he really cares for Kaoru
too bad he sorta falls into the background after that morning in the prologue and I really wish
I got to see more of him but he just had to disappear from the face of the planet
and apparently Tsukasa's route or should I say ending is tied to Morihito's route.
(I don't know anything else, I only took a peek at a guide.)
~ 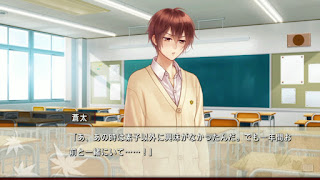 Classmate... can be cute but he's is a bit of a siscon with his sister Motoko
and like Tsukasa his existance ceased to matter after a certain transfer student appeared.
~


Nagami Ren.
CV: Akabane Kenji.
A mysterious silver haired man that appeared when Kaoru called for help right after
being disgusted by what she just did, not saying much else Ren just up and kisses her...
without explaining anything only saying it will help to calm her down.
Only for freaking Kaoru(and me) out, they really seem to push him as canon? love interest because
I already know Ren's route is locked till you do everyone, possibly being a bag of spoilers?
Cue the sudden transfer into Kaoru's class as well... hmm? isn't this suspicious, atleast he
explained partly what's going on about the Kamiki and the past and helps Kaoru out when she asked.
Ren wouldn't even mind dying to do so... but something tells me he has other reasons for doing this.
Either way the time spend with Ren was mostly peaceful...and a giant info dump at that.
Ren seems to have ulterior motives but felt like he saw her as a normal girl unlike Morithito
but Ren has his own agenda and can be seen as an asshole, I still grew to like him cuz he gives no shit.

Kamiki Morihito.
CV: Ono Yuuki.
Just as Kaoru becomes determined to do what is necessary Morihito shows up being all
grumpy saying isn't the answer obvious? after Ren suddenly invited her over to his place.
At first Morihito just says I came to get you multiple times without anything else.
Ah why are the boys in this game like this?! first Ren and how this guy, FFS keep it in your pants
and explain wtf why you want me to come with you instead of Ren? ahaha nope.
God bless Kaoru for telling him off because she isn't so meek to go along
with some new boy just cuz he says so, anyway Morihito and Ren are acquaintances
but Morihito is butt mad that Ren kept quiet for so long when he already found Sera-hime
who btw is Morihito's self-proclaimed waifu, btw Kaoru was like get out i'm not your wife yet.
Morihito doesn't take the no memories excuse Ren pulled either so Morihito gets
extra pissy when the kiss between Ren and Kaoru earlier is brought up.
Just as a scuffle unfolds between Ren and Morihito the POV switches to the Kuga family
to introduce them and it basically ends with them starting their move.

~
Kuga Shiou
CV: Tachibana Shinnosuke.
Shiou appears to be normal but apparently isn't quite so hot in the head
and from what I gathered he's quite uhm lustful towards the one once known as Sera-hime.
~


Kuga Touji.
CV: Takemoto Eiji.
Combat butler, old enough to be a father he serves Shiou-sama
and let's just say Touji is very serious about his duty as a butler.
~ 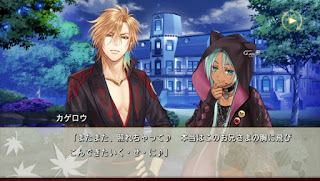 Kagerou is the shota to the right, he loves to tease his big bro
when all of them are introduced they head out because Sera-hime aka Kaoru is nearby.
The demo ends here... a well timed spot if you ask me because I surely want to know
what is going to happen next even if some parts were a little slow for my tastes.
~

Final Thoughts
I can say I liked it but honestly it drags out the early school parts for too long
and the writer loves to give huge chunks of narration at you even
in the fight scenes making them lose the current suspense that was build up.
Also half of the common route in the demo felt like Kaoru and Ren were in their own
little world...  dunno if it was due to choices I picked but it was jarring.
I get he knew she had no memories and had to explain everything slowly but man Morihito had all
the right to be so pissed at Ren for keeping Kaoru his self-proclaimed waifu all to himself, lol.
From what I saw Kaoru seems to be a great heroine with potential but really
this is going to be something that by the end of it all you'll either love or just be meh about.
I am not sure whether or not to actually get this because it seems to be a mixed bag of things
I like(past intrigue) and things I do not like(boring present day TL;DR).
At the very least all of the romantic interest that appeared in the demo seemed to be likeable!
If you want to get this please do try out the demo first and see if  this is something
you can get into, its okay for games to have long introductions but
it was so slow in the beginning so I wish it was more to the point because when
it did get good I did get a little absorbed into it, despite complaints its all good in the end?
Atleast this is better than say the orfleurs vita port which was a shell of its former nukige self.😂

Either way I know I do not like VN with absurdly long monologues but for some reason
I want to finish reading this story all the way to the end because the way this
demo ended left me in a bad spot and I really want to know how its going to end
so its highly likely I'll get the full game, well played Operetta well played.
Geplaatst door Rurunikiri op 12:13 PM