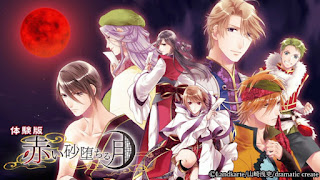 A demo for an otome game! I wish more companies did this!
Instead of like making us waste money... but then again from a demo it might still
be hard to judge the full game because who knows if it gets bad or better later, haha.

Akai-Suna... a game originally released for PC in 2013, here's the funny part as
the trial for the PC version came out in 2010, and even after 3 years of dev it had no voice acting.
I presume they lacked the budget to hire the seiyuu's...
I can see why this went under the water because after 3 years I would've totally forgotten about it.
Seems more like it they released the PC trial way too soon, lol.
So dramatic-create salvaged the PC version and ported it to PS Vita, in the process they added
voice acting and additional CG/scenario because they saw the rough gem Landkarte made.
Or something like that... 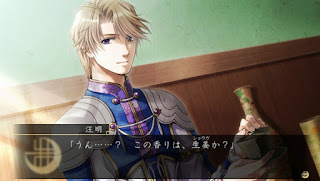 Storywise it seems interesting enough for me to think about buying it!
Some of the plot reminds me of wizard and master and the overall setting
feels like Saiunkoku Monogatari or something similair to that.
I only recognize Oumei,Rakusen and Shoukyou's seiyuu's while Eishou and Kohaku seiyuu's
seem to be rather new since I haven't heard or seen their names that much.
Overall the seiyuu choice seems alright since its not the usual same old... well except Rakusen.
Depending on the choices you make during the first chapter it will shape the
personality the heroine Shunka has, I find this is rather nice since its something thats not used alot
but do not expect the story to change, Shunka may or may not be a troll and make snarky comments. 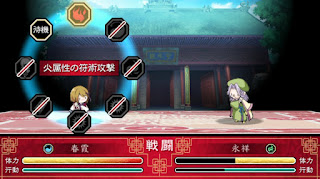 There are parts where you have to fight, thought the system seems to be simple enough?
Anyway the devs are nice enough so that you can skip this battle part on future playthroughs. 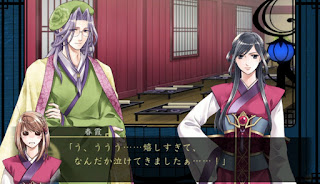 The demo seems to be of decent length as it gives you a good look of what
Akai Suna Ochiru Tsuki has to offer,  honestly I love these type of settings  but I'm still just not sure
if its really going to be worth my time, in the end I'll probably buy it and put it in my backlog.
On another note I really don't like the PS Vita box art for this game...
the art on the cover looks really derpy in my eyes, but I can't really complain lol.
In any case I decided to pass on this game for now atleast, its not something that requires my immediate attention so if I do end up getting it one day I'll be sure to write a full review.
However till then... I suggest you play this demo for yourself if you're in doubt. 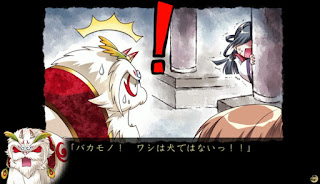 You should definitely give this demo a try, as its free after all!
It would be such a waste to not try it out atleast once.
So what are you waiting for? go try out the demo and decide for yourself!
https://store.playstation.com/#!/ja-jp/...
Ofcourse you need a japanese account on your PS Vita but I guess you already knew that. :P
Geplaatst door Rurunikiri op 6:53 AM