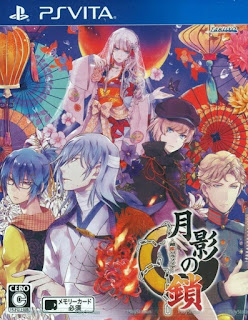 TL;DR
8/10
This is like Spice and Wolf the otome game it gets close but not its quite similair, lol economics!
I guess it gets close to Clannad too due to ts tragic/depressive nature...
Its not all that bad but this otomege is going to need an acquired taste as it isn't light-hearted
in the slightest, its probably the most realistic and mature otomege I've played thus far.
Also this game isn't for beginners of japanese language, you should've figured from
the old timey setting, economical crisis, talk of morals and politics...

Pro's
- Mature and realistic story of people trying to survive through dark times.
- Interesting characters and all the guys are likeable in some way.
- Art.
- BGM is well used, you can clearly tell if the scene is going to be happy, sad or no good.
- Unique Seiyuu cast.

Con's
- Story is one tough cookie, as its not light hearted in the slightest.
- The main villain reasoning might be difficult to understand.
- Not much sugar content.


So here we have it I decided that the first otomege from Takuyo I'd play would be this one...
I like the setting, a town struggling to recover due to an accident one year ago.
They get help from an unexpected corner but the townsfolk aren't very confident...
The townsfolk may be assholes but considering what they're going through its kind of
acceptable to me  because there really are people like that out there.
Anyway I really disliked the townsfolk at times especially Satoya's route... the harassment
Megumi had to endure was just sick, in every route they pull something shitty, but that
was the last straw and its also sad how Megumi easily forgives the man for it ( ಠ益ಠ)﻿.
Anyway I can totally see why some people might avoid this game
as its just full of despair and some endings might not end up being a happy one
like in most games, though there is still a good outcome waiting for you in this sad story.
More importantly this game is very realistic in a lot of ways, we won't
have the power of love saves the day here, nuh uh none of that here, there is ofcourse
love but it won't solve any of problems the island is facing that easily. :P
The only time love actually worked was in Satoya's route, but then again... maybe this was intended.
Knowing Takuyo you should also expect some twisted stuff.
Because they love doing that at times.

The romantic development while slow, felt natural so thats another plus in my book.
Its like this: plot first, romance second which imo is fine by me.
This game is also really long... it takes its time building everything up slowly.
Sometimes I had the feeling scenes were going on forever, dunno if that is good or bad though.
Oh and I really liked the heroine in this work, she's been through some shit in the past and it
doesn't stop in the present but she just stands tall even tho she's about to break.

The guys are all likeable and interesting the first time Megumi meets them and the
choice of seiyuu is great once again! as the only one I recognized off the bat
was Mochizuki Satoya's Seiyuu Matsuoka Yoshitsugu. :D
Its also worth noting that the characters don't suffer from overused personalities-stereotypes like
for example tsundere as they are all really mature, it works well with the setting.
Honestly its nice, I don't want the same tricks being uses over and over again as over time it gets
old the more games you play, so every once in a while this is really refreshing.
Also it seems Takuyo doesn't put CG variation into one slot at the gallery...
and so we have 5 slots dedicated to onii-sama lying in bed with a fever. >_>
Also it seems Haruna has the most CG's? what is this bias he had like 3 pages, lol.
Oh well most of them were CG variations like you can see Hibiki's below...
Oh well that aside let's move on to the OP...
at first I was like oh okay to its actually pretty decent and the song really grew on me.
~
I still like the art and the music is really fitting and for once its rather memorable.
The system? its decent like the average otomege, no annoying minigames here.
As for the endings...
I prefer Nozomu's 光を支える闇、闇を支える光 ending, it was a really good conlusion.
As for his route and personality in general, he's a flirt but I didn't really understand
Nozomu that well, though when I look back his route was alright.
~
For Wataru I prefer the  これからもずっと傍で ending, it once again didn't disappoint me at all.
Decent route, Noa was adorable and the family drama was sappy, the  townspeople were oh so
terrible because Wataru and Noa are outsiders(Oni) but despite all that
I really ended up liking Wataru everything was wrapped up nicely and there's
prolly not much a FD can do.
~
Satoya's route was alright but I felt it was different from the others and it was dragging on at parts.
Most likely because of Megumi being held at Koukarou for her own protection... >_>
She couldn't do that much, Megumi was pretty much a caged bird.
Also I'm disappointed Sae disappeared from the story so easily, she's Satoya's fangirl.
Sae didn't even appear that often which makes me really glad but was written out so easily, lol.
Fukami was also potrayed in a new light, he even gave Megumi some love-advice.
Fukami should just have become a therapist...
Satoya's 人に愛し愛され生きる (Aijou) end was in my opinion the best, no complains.
His 満月夜想 (Izon)was strange, Megumi acts like a yandere? and in the end Satoya gives in
and he'll do anything even if it means dying, I didn't like this ending or the other izon end for that matter as they're just filled with despair like most of this game in general.
~
Hibiki... I don't know why I saved him for last but I do not regret doing so.
His route was pretty good actually, I really liked the conclusion to his love end, perhaps it was the best?
It gives you a satisfying feeling to end the game with, even if its not a real happily ever after
but in a way it was... his Izon ends? they're heartbreaking as always.
So there's not much to add really, Other than that the townspeople finally redeemed themselves
and apologized to Megumi, which they never did in any of the other routes...
In my opinion, Hibiki had the most touching story, I liked it alot.
As you can see I pretty much prefer the love/affection(Aijou) ending for all guys. :P
Wait who wouldn't?
~
The dependency(Izon) endings are pretty bad, stuff does go wrong in izon and I mean
horribly wrong in most routes to the point they leave me with a bad taste in my mouth.
I always did the affection routes first and izon last, there is change of events but the route itself is the same, the second izon ending doesn't have a CG but that doesn't make it less painful. :(
So once you do love, most of the izon path will fly by but choices do make a difference
since it will drastically change some the events, I really didn't like Wataru's izon's endings.
It was just a bit too much for me...
The love route most definitely has the best possible outcome, in most cases its a happy one.
I will always do Izon last, because I want to enjoy the first time I go through the route
and this works out all the time, atleast for me unless the order of endings is forced.

My play order: Normal ending > Haruna >  Wataru > Satoya > Hibiki.
I went for the normal ending first for once, aka the onii-sama ending but its not romantic or anything.
It was also shorter than the rest... I heard it leads into his route in the fandisc, oh well it was too short!
As for Onii-sama in general, he's like a ray of sunshine that shines through the dark clouds.
He made me laugh many times, and well Miura Hiroaki's performance was excellent.
If you ever wanted to hear Miura Hiroki talk like a girl well here you go.
Then I went on to Nozomu's route and...
Man was this game dramatic, it tops Reine des fleurs and Clock Zero for sure.
Honestly the plot was much better than Reine.
I still liked it though but its also pretty long, I think its better to have another game
ready preferably a fandisc or a really cute and fluffy game ready so you can switch it out
just incase you have had enough of all the depressing stuff, all in all this
makes Getsuei no Kusari a game that might not be for everyone.
Maybe thats why it took me so long just to finish Nozomu's route.
But once I finished Nozomu's it did become easier to finish this.

The overall story does stays the same in all route but will be different depending
on who's route you are on but some things will just never change...
Like the tax and price of goods go up aka more economical suffering and Megumi struggling
to keep her store open and getting bullied by the townsfolk.
Still there are some interesting reveals in every route which make it worth it.

8/10
All in all it was a great otomege, the story is decent even though its so depressing.
Like Clock Zero it has a heavy storyline, but sadly I cannot recommend this as much
unless you really like realistic drama, doom and gloom which is sadly what the base of this story is about.
CZ balanced the drama out nicely with the first part of the game which was cute, but here... nope.
This otomege is not light-hearted in the slightest but the romance was really good still.
Its not that bad at all but this otomege is going to be an acquired taste.
Aka this otomege is something one needs to seek out, if you don't like realistic depressing stories
filled with despair stay far away from this game, if you do like that then yeah go for it. :)
As for me I knew what I was getting into so as long as you know its not light-hearted you'll be fine.
Not many otomege go this far with these type of settings and they aren't being made that often...
Which honestly might be a good thing, lol.

As for husbando ranking, I liked everyone but there is no point for one. :(
In the end I would just pick Wataru over everyone else what is bias?
For route enjoyment it would be this but it doesn't mean the one at the end was bad:
Wataru > Hibiki > Satoya > Nozomu.

Honestly I'm not sure if I want to get the fandisc if that ever gets a vita port not even for onii-sama.
Unless they add more CG's and fully voice the townspeople.
I was quite satisfied with this game, I don't exactly need anything else, Takuyo did
a good job already with the first game as imho it is finished, maybe just maybe if the FD
gets also gets a PS Vita port and if they add more worthwhile content that is not in PSP version.
If there was nothing new in the port then i'm going to have to pass, which wasn't the case
as they added two entirely new characters the Toudou brothers, Itsuki and Miyabi.
The FD is more or less the same as this, it has some sweetness but you shouldn't expect a lot.